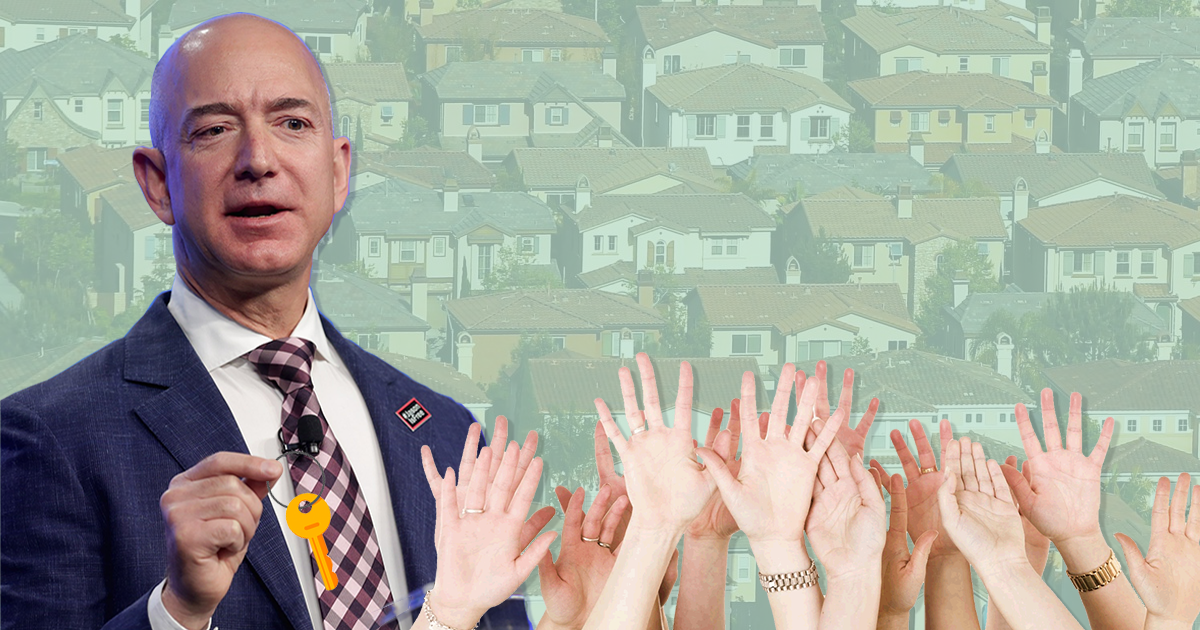 The king of e-commerce has partnered with Salesforce CEO Marc Benioff in the Space Race. There is formidable competition. Virgin Galactic founder Richard Branson, already a legend in air travel, has his own space ambitions, as does Tesla Founder and CEO, Elon Musk.

But back at mission control, Bezos is moving in on a neighborhood near you.

Arrived Homes is the latest fintech app that aims to remove obstacles between individual investors and wealth-building opportunities.

At first glance, Arrived Homes seems like it’s lowering the barrier of entry to the real estate market. This will ring like a siren call to Millennials and Gen Z, already significantly behind where the Boomers were at this stage in their lives by measure of property ownership.

But things aren’t always what they seem. Peeling back just one layer reveals that Arrived Homes could lock Millennials and Gen Z out of homeownership for good.

The cost of housing in the United States is primarily a function of supply and demand. As Millennials pay off student loans and negotiate salaries that resemble progress on paper, the cost of homes is always one step ahead. The price tag is always increasing a little faster, always just out of reach.

Raises and promotions never seem to keep pace with the rising cost of living, creating a confusing life conundrum that has resulted in postponement of marriage and a free fall in birth rates.

Millennials are now in their late 20s and their 30s, and Gen Z is on the shores of adulthood. Both cohorts rightfully want their share of the proverbial pie.

The pandemic brought on a Millennial wave of Urban Flight, as lockdowns made city dwellers realize just how small their living spaces really were. The influx of buyers in the already-tight liquidity market has led to home sales closing over asking prices by double digit percentages. According to Redfin, 70% of buyers faced bidding wars in May of 2021 – up from 52% of buyers in May 2020.

Juxtapose that against a market whose supply stock has been stunted by city ordinances and permits, largely reserved for large developers with deep pockets. Not-so coincidently, those same developers also happen to be the benefactors of the housing subscription model.

Another sneaky force adding pressure in the mix is the rise of AirBnB. The short-term rental app took even more housing chips off the table. Its platform further incentivized the mindset that houses are investment assets to capitalize on – not homes that people need to live in.

These pressurized dynamics were already driving double digit ‘appreciation’ in real estate. According to a June S&P Global report, the U.S. housing market gained 14.6% in value year over year between April 2020–2021. At time of press, that trend is showing no sign of slowing.

The real estate market’s ‘appreciation’ percentage gain is one way to present the fact that renting Millennials and Gen Z are now 14.6% further behind the American Dream, which for our intents and purposes here, starts with owning a home. It also loosely translates to “rent is probably going up soon.”

That makes for two demand-side pressures contributing to the price increase in the housing market, while the supply side has remained stagnant. How will we solve this problem?

Jeff Bezos is a man of profound talents. But great talent can be applied to bad visions with harmful ramifications. Indeed, misguided ambition can amplify the fallout of a small-context vision.

Arrived Homes will accelerate the transformation of the American Dream into an ‘investment class’ that appreciates. That’s a big change from its place as a milestone of “making it,” and symbolism of freedom and independence.

The housing market’s assetization is reminiscent of the successful conversion of higher education into an investment, which learned everything it knew from the capitalization of health care.

Arrived Homes creates an access point for investment capital to flow into the pressure cooker that is the American housing market. It creates more demand without a corresponding supply expansion. You don’t need a finance degree to understand that when demand exceeds supply, prices will continue their exponential climb.

As material wealth continues to consolidate into fewer hands, young adults will continue to find themselves in perpetual debt without ever owning anything.

Intentionally or not, Arrived Homes deceptively positions itself as granting access to a market that it is actually shutting people out of. Americans don’t need partial ownership in rental properties: They need a primary residence. The number of renters officially eclipsed the number of homeowners in 2018, and the divide has been growing ever since.

The math isn’t hard: Every property added to Arrived Homes’ portfolio is one house’s status going from owned to rented.

But it doesn’t have to be this way. HappyNest is a collective investing, real estate fintech app that, first of all, arrived to the market before Arrived Homes did. Our platform gives real people access to a market they never could realistically consider – the literal inverse dynamic that Arrive Homes creates.

HappyNest seeks to help people grow their primary nest egg, by opening doors to wealth-generation opportunities without slamming the doors on other future prospects. That’s because HappyNest’s investment portfolio consists of commercial and industrial properties, a lucrative asset class that has historically only been available to the wealthy and connected.

But by pooling capital from real people, we can cultivate access to possibilities we couldn’t accomplish individually. By teaming up with HappyNest, investors aren’t indirectly driving up living costs and minimizing their homeownership prospects in the future.

Wouldn’t it be wonderful if Jeff Bezos instead applied his incredible gifts and talents to something that enriched communities, not just board members? The man has the world at his fingertips – any further personal wealth accumulation at the expense of others is no longer ethically justifiable by ambition alone. It’s hard to imagine there would be a tremendous change in his living standard compared to what he’s established after his first few hundred billion.

We already know Jeff Bezos can accomplish whatever he sets his mind to, for better or for worse. Who will be impressed if he makes another successful business? At this point, it’d be more surprising if he didn’t. Any more wins in this arena are expected –  boring, even.

Perhaps Bezos should consider expanding his definition of value and worth. He could challenge himself to look beyond dollars, patents, property, and copyrights. He could focus on drawing up the blueprint for more conscious capitalism – one that is focused on ‘win-win’ as opposed to ‘win-more.’

Can Bezos sell the vision of a cleaner, more equitable world? Could he work out the operational inefficiencies in energy production and consumption? Can he set up the infrastructure for every American to get quality health care with Prime-level speed? How about cut the cost of lifesaving products like insulin while still maintaining enough margin to support a healthy business?

Can he change gears now, from building an empire, to investing in a legacy?

We hope we live to see it. If Jeff Bezos were to pursue a venture like that – we’d buy the first share.

But with this next venture – Arrived Homes – the answer appears to be ‘not for now’.

Perhaps the allure of becoming the world’s first trillionaire is something he simply cannot resist. It almost seems that the biggest weakness of the world’s most successful man is one most of us can relate to in some way or another – our own egos.

Once he’s conquered the real estate market to his liking, he might still have time to achieve his greatest feat yet – merging aptitude with empathy, while Millennials and Generation Z sort through the damage his monumental success has inflicted upon their lives.

Until then, we invite you to think not just one, but two steps ahead in your investing journey. Together, we can get our share of the American Dream, too.

And some things are worth fighting for.