Despite the wild ride investors of all kinds have been on this year, their portfolios were almost certainly hit with volatility.

Long-standing investment wisdom holds that markets do not like uncertainty.

The best we can do to manage risk under murky conditions is minimize the variables that contribute to volatility.

But after an IPO, publicly traded REITs become subject to numerous irrelevant or amplifying market factors that do quite the opposite. Many of those dynamics have little to do with the performance of the REIT’s portfolio value or management.

Here are three reasons why private REITs are an attractive alternative investment to hedge your portfolio against volatility.

They aren’t in ETFs

A well-run, private REIT’s share price is a truer reflection of value than many publicly traded investments.

Consider this: According to ETFGI, an independent market research and consulting firm, the number of publicly traded ETFs has gone up more than seventeen-fold since 2005.

At the same time, the number of companies listed on the stock market has been on the decline. 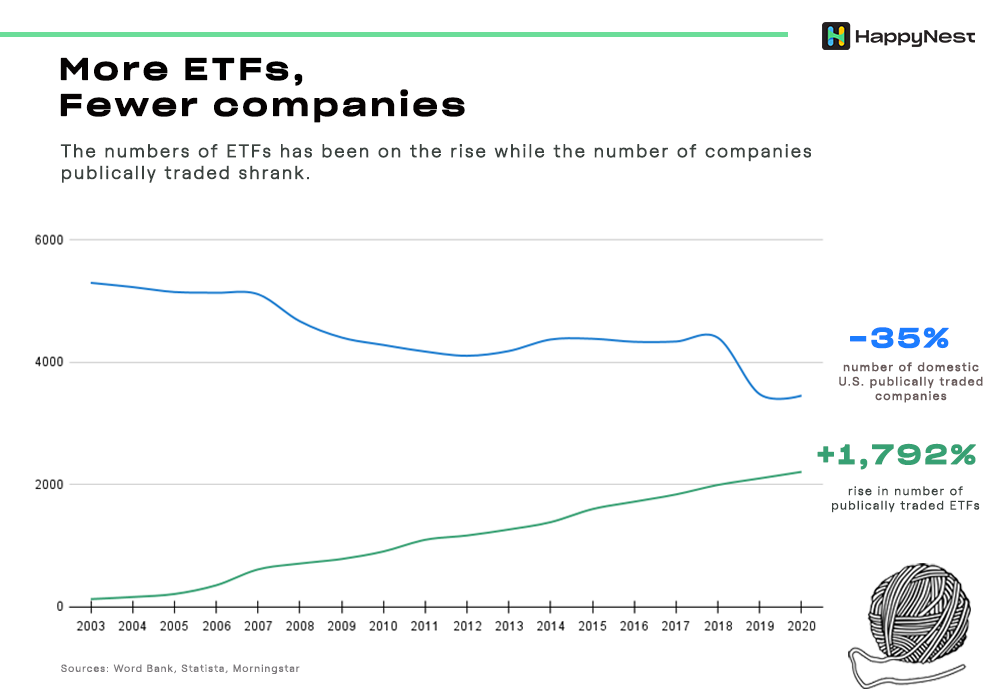 The result? The stock price of publicly traded securities is becoming increasingly tied with the performance of the overall U.S. economy – and less reflective of the underlying assets performance.

The value of the investment asset is now intrinsically tied to the performance of all the companies in the fund. That may include competitors or even completely unrelated industries.

There are 20 publicly traded ETFs that are combinations of various REITs.

If one asset in the ETF dives, the value of all assets take a hit. The more ETF exposure, the more amplified the influence of groupings becomes on share value.

You know what they say: The company you keep.

By contrast, a private REIT’s share value is primarily a function of real estate appreciation and property management performance.

That has proven to be a blessing for HappyNest’s portfolio.

The tides of the last 12–18 months have hit various real estate sectors asymmetrically.

Some sectors thrived: The demand for industrial properties, such as HappyNest’s shipping fulfillment center in Fremont, IN, grew substantially as major retailers dialed up their e-commerce capacity.

Meanwhile, large sections of the workforce were sent to work from home. Skyscrapers and office buildings across the country became ghost towns.

How quickly the demand for office space and other hard-hit sectors will rebound remains to be seen.

Had HappyNest been grouped with an office space REIT in an ETF, its share value would have been impacted by office sector decline. That is despite the fact that HappyNest has no office space real estate in its portfolio.

GameStop is lucky – they were given a second wind by retail investors.

But hundreds, if not thousands of other publicly traded, struggling businesses have not (and will not) be given a second chance.

When hard times hit, the last thing any organization needs is numerous parties betting on their failure.

Last year, as retailers across the country were forced to shut down, retail REITs faced many challenges. Vacancies mounted, decreasing revenue.  Property values themselves also took a hit as shutdown uncertainty cooled demand.

To make things harder, short interest in retail REITs skyrocketed. Tanger Factory Outlets for example, has over 30% short interest as of February 12th, 2020. That only adds anvils to already-heavy challenges.

In current market conditions, Tanger Factory Outlets would likely be better off as a private REIT. Were that true, they would be insulated from the downward market pressure of short sellers simply because, well, their shares wouldn’t be shortable.

One publicly traded share can be, and often is, traded numerous times a day. Day traders and algorithms are the arbitragers of investing.

They have little to no interest in the long-term success of an underlying company. For them, it’s not really an investment – it’s a trade.

In fact, short-term traders are generally quite agnostic about what they’re investing in (especially the algorithms).

Their strategy is to capitalize on short-term price action. That’s it.

They jump in for a few hours, maybe a few days, and leave.

This ebb and flow of day trader capital in an investment pretty much only brings volatility to the share price, blurring the true value of an asset.

The rise of commission-free and independent traders has increased the ranks of these kinds of traders substantially.

This type of activity is, for the most part, a non issue in private REITs.

When investors buy shares in private REITs, they generally intend to hodl it for the long term.

Shorting, ETF groupings, and day trading are all volatility variables that are not factors when investing in private REITs.

The result is a steady investment foundation on which to determine the best possible strategy to optimize shareholder return without fear of unexpected liquidity issues.

While some real estate sectors have hit rough times, others have experienced tremendous growth. HappyNest’s portfolio been on the right side of that line and has a bullish outlook.

All of HappyNest’s portfolio properties have active, 8-10 year rental agreements with major organizations such as FedEx, AutoZone, and CVS.

Given the balance sheet of these organizations, we expect our revenue flow (i.e.: rent) to remain steady as well as the value of our properties to continue to appreciate.

Everyone has to decide their own investing strategy risk tolerance.

But no matter your investing style, having a steady and reliable investment in these volatile times not only brings ROI (and passive income), but also peace of mind.

And it’s hard to put a price on that.